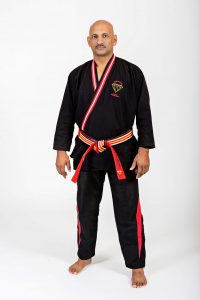 Krishna Gopal, the founder of Kurodaiya, is an innovator in the field of violence management and aggression (professional and private) and an out of the box thinker. He thinks logically, simple, practical and effective on problems we face daily in our life than the average citizen or politician. His vision of the solutions goes beyond those of the established professionals. His goal in life is to make life more enjoyable by developing innovative insights into actions we take every day.

Krishna Gopal is not only a personal trainer for the mind,  body and sports masseur. He is also a gifted thinker and solution-mental coach. As a public speaker, he puts respectful conflict apart, where gender roles, identity, values, self-control, and acceptance will be discussed.

He is the developer of the unique innovative self-defense fighting system called Kurodaiya. Through his “out of the box thinking”, he has put down this self-defense system in the world by applying the biomechanical process of the human body. Non-aggressive action to protect yourself optimally, where the goal is not to find oneself in a fight but to ensure that the attacker can not continue with his attacks. You will be able to protect yourself in a (100%) proportional way.

For this reason, Kurodaiya is a revolution in Martial Art and is  ”The next generation Self-defence – fighting System”.

Krishna Gopal has patented Kurodaiya and founded KTEC with headquarters in the Netherlands and side branches abroad. He also has developed Kurodaiya Violence Management Program with and for the professionals.

He is the copyright holder of the well-known and widely respected slogan:

Krishna Gopal, an expert in the field of the biomechanical process of the human body,  master in various martial arts, creator of the Kurodaiya system and founder of KTEC, can be booked for several master classes and presentations and to hire as a personal trainer.

* Training in Kickboxing and boxing Without using blocks to prevent injuries during training.

* Innovative (by applying the biomechanical process) insights into Self Defense, Advanced Weapons and Defense & Offense

* Respectful Confrontation for law enforcement officers (full respect with the other person in a confrontation) (Gender roles, values, and norms, Identity, targeted action)

This involves taking care of the body both inside and outside. (nutrition and massage)

* Athletes who want to achieve more with fewer injuries

* For people who want to do workout

* Weight control and conditioning of the bodies

* People who have difficulty to come in motion

Experience in the martial art since 1976

Referee All style and Kickboxing

Philosophy of the Century Award (2010)